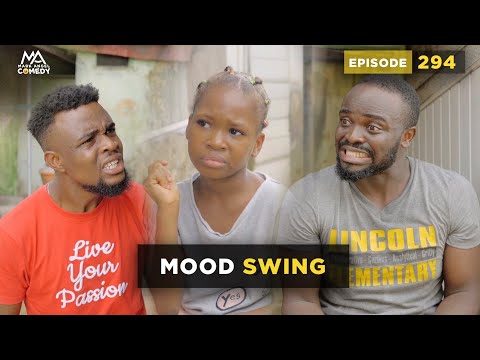 In this episode of Mark Angel Comedy tilted Mood swing Base 10 lands Kbrown in a big trouble.

Kbrown is unhappy as his girlfriend refuses to respond to his calls, Base 10 overhears him screaming out his frustration and ask to know which of his girlfriends he is trying to reach on phone, but without waiting for an answer from Kbrown starts naming all Kbrown’s girlfriends, this makes Kbrown uncomfortable as he asks him to stop and then tells him the girlfriend he was trying to reach. Base 10 then comes up with an idea to make the girl picks Kbrown’s call.

He suggests that the girl is broke, that she has a Mood Swing as a result of that so if Kbrown could send her some money she would be fine and then would respond to Kbrown’s calls. Kbrown is happy about the ideas as he sends the girlfriend a thousand naira.

A few seconds later, the girls call his phone, Kbrown is happy seeing the girl’s call and eulogies Base 10 and picks the call, but he is shocked when the girl said she does not need his money and as a matter of facts was not interested in the relationship any longer and drops the call. A few seconds later, Kbrown receives an alert of N2000 naira. It is from the girl, she had sent the money back with a 100% interest. Kbrown is frustrated and could not believe what had just happened, but Base 10 again offers to help by asking him to send her a bigger amount of money, promising that she would take the money and respect him.

Kbrown again does as suggested by Base 10, but again she rejects the money and sent double the amount back to Kbrown. This got Kbrown very unhappy, but Base sees a business opportunity in the girl’s action as he tells Kbrown to send her N50, 000 naira, since the girls send back double the amount of money he sends to her, she would surely send back N100,000 naira and they would share the money. Kbrown buys the idea, but he does not have up to 50k in his bank account, he only has N25k. But Base would not let that be an obstacle as he offers to give him N25k to add to the money he has and send to her. Kbrown is happy about this and asks him to send the money to his account.

In a jiffy Base 10 transfers the money to his account and in a jiffy, he sends the money to the girlfriend. Little Success is not OK with their idea as she warns them about the risk in it, but they would not buy it as Kbrown tells her that in Business, there are no emotional attachments. They are now happily waiting for the girl to send back the money with a 100% interest as usual, and a few seconds later, the girl calls back as expected, but this time she asks for the reason he keeps sending money to her account after she had warned him many times not to do so, Kbrown insisted that he just wants to prove that he cares about her.

The girl is not convinced by his response, but anyway thanks him for the money as she says she is not ready to continue playing the games of sending back money to him and promises to block his line after talking to him on phone.
This got kbrown and Base 10 devastated. They have lost all their money to Ponzi. Little success is not moved by their tears as she reminds Kbrown and Base 10 that in business, there are no emotional attachments.

You have to insert it in the of your website:

What do you think about this Video?

RECOMMENDED VIDEO FOR YOU 👇

I want to sleep with Sunday Igboho – Lady cries Out (Video)

Chief Imo Comedy || when a land lord is taking advantage of his female tenant !! wahala deyoo

Go Back To The Top

Looking for something? Search below