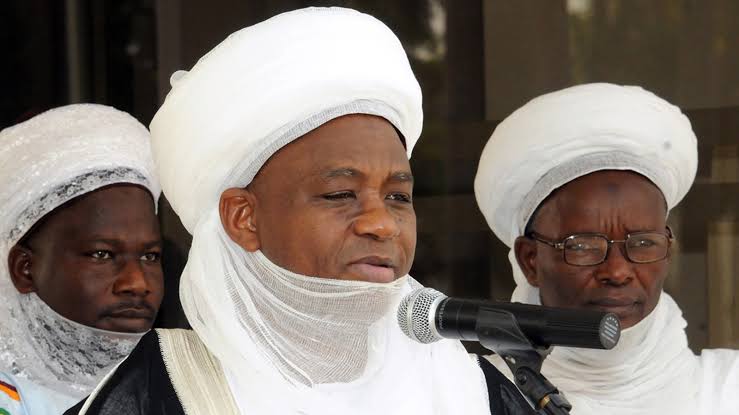 The Sultan of Sokoto, Sa’ad Abubakar III has declared that a bulk of Nigerias current problems are as a result of lack of understanding among its component groups
The Sultan made the observation in Kano on Friday while speaking at the inauguration ceremony of the Inter Tribal Traditional Leaders Association of Nigeria
The Sultan maintained that it is better for Nigerians to understand one another than to tolerate one another arguing that people who tolerate themselves rarely give room to work together and attain their common objectives
The Sultan confessed that the assembly of traditional leaders and criss section of Nigerians at the event is yet another effort aimed at bringing Nigerians of different backgrounds together as one big family.
He observed that, ” Definitely, we may not agree on all the issues but lets respect one another, lets be civil in the way we address issues with one another….lets discuss and by the time you get to know the reason why I hold such views, you might be persuaded to understand me”
The Sultan acknowledged that the nation is made up of people of diverse backgrounds, urging all to tap the nation ‘s diversity as a source of strength instead of letting it serve as weakness.
He counseled Nigerians aldo to see themselves as equal partners of one family, saying none is a subordinate to the other and none is better than the other.
The Sultan charged the steering Committe headed by Sarkin Kano, Igwe Boniface Ibekwe to incorporate traditional leaders from the minority tribes adding that the richer is their spread of membership, the better for the country..
in his remarks to the association, Governor Abdullahi Umar Ganduje of Kano State said thst by forming the Association, they have demonstrated their commitment to unity and sustenance of one Nigeria at a time of great national challenges.
The governor said thst it is imperative for all to realize thst we need one anothee to survive while stressing that no part of the country can do it alone.

2 Replies to “BREAKING: Nigerians should learn to respect each other and be civil – Sultan Says”