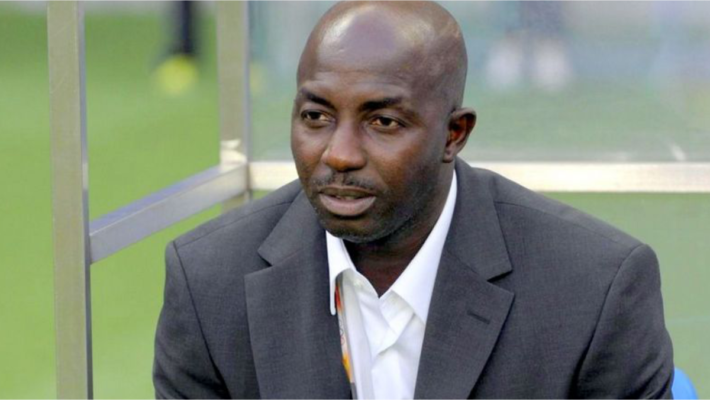 Former Super Eagles coach, Samson Siasia has expressed disappointment in how the Nigerian government and his Super Eagles teammates all abandoned him during his life ban case.
In 2019, Siasia was banned  for acceding to fix match in exchange for bribe. But Siasia denied the allegations, appealing FIFA sanctions.
Earlier in the week, Peoples Gazette reported how Siasia’s life ban from football was reduced to a five-year ban by the Court of Arbitration for Sports (CAS). A fine of CHF 50,000 (US$50,000) imposed by FIFA on Mr Siasia as part of the sanctions was also “set aside”.
Siasia, however, said in spite of his sacrifice for Nigeria as a player and a coach, he was abandoned by the Nigerian government, while his teammates showed no concern during his ordeal.
“The minister for sports came in few weeks after my ban.
And the minister called me and said, ‘coach, I know about your problem, but we don’t have money,” Siasia told journalists in Abuja on Friday.
“That was it.
I think what he could’ve done was to go to the president because I’m a legend – I’ve played, broke my legs, coached for this country.
But, unfortunately, the government has not done well when it comes to my case. So I’m not happy.”
“The most disappointing moments were when your colleagues that you played with never called you to ask you how you’re doing.
Even the legend games – I don’t know what FIFA ban had to do with legend games – they don’t even invite me or put me amongst whatever they are doing.
So I’m very disappointed with that,” Siasia said.
In 1994, Siasia won the Africa Cup of Nations with the  Nigerian Super Eagles. Under his watch, Nigeria’s under-20 emerged runners-up at the 2005 World Youth Championships.
Winning a silver medal at the Beijing Olympics in 2008 and a bronze at 2016 Olympics at Rio, Siasia is rated the most decorated football coach at the Olympics in Africa.