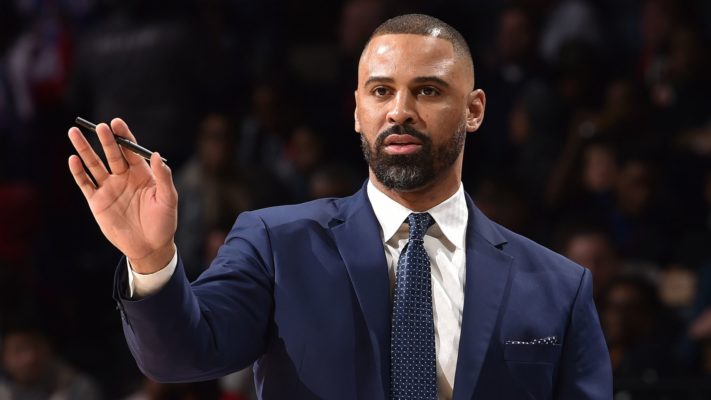 Former D’tigers star Ime Udoka has made history, becoming the first Nigerian NBA coach.
The 43-year-old Nigerian-American was on Wednesday appointed as the head coach of the Boston Celtics. He was considered a frontrunner for Celtic’s lead managerial role after successfully scaling through a two-round interview.
Mr Udoka was part of the D’tigers 2005 squad that clinched the bronze medal at the FIBA African Championship. In the final game, Udoka scored 24 points to help Nigeria defeat Algeria 88-76.
He also featured at the 2006 FIBA world championship, helping Nigeria get out of the group stage, and was part of the Nigerian team that won a bronze medal at the 2011 AfroBasket championship, defeating Ivory Coast 77-67.
The former D’tigers star holds his first head coach role after serving at different clubs as an assistant coach for nine years.
Mr Udoka started his coaching career as an assistant coach at San Antonio, where he spent seven years working under Gregg Popovich. The ex-NBA star later moved to the Philadelphia 76ers, where he had his 2019-20 seasons joining the Nets last offseason.
With the appointment, Mr Udoka became the first head coach of Nigerian descent in NBA history. Born to a Nigerian father and an American mother, he is one of D’tigers stars that had a great professional career, playing for top teams including La Lakers, New York Knicks, Portland Trail Blazers, Spurs, and Sacramento Kings. Mr Udoka also played in the lower leagues in America, in Argentina, and in Spain.
Meanwhile, Nigeria’s basketball team has congratulated Mr Udoka on his appointment. D’tigers, in a congratulatory message via @NigeriaBasket, its official Twitter handle, said, “Congrats to our very own Ime Udoka. The first Nigerian head coach in NBA History! The Celtics got a good one! Green and white like always.”