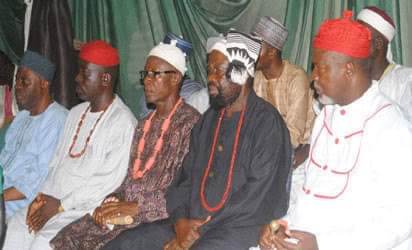 Nigerians, in particularly the old eastern region has disagreed with south east leaders’ position on their commitment to unity of Nigeria, saying they are speaking for themselves and not for the masses demanding referendum to settle Nigerian’s unity.
NN News had reported that the delegation from the Federal Government led by the Minister of Defense, Retired Maj. Gen. Bashir Magashi, met the Governors of the five States of the South East and other leaders of political, religious and traditional at the Government House, Enugu, reiterating their commitment to peace, unity and stability of the country.
NN News gathered that, the people of the region argued that a referendum is the only option to settle the unity of Nigeria that the south east leaders’ position does not represent or speak for the masses, saying agitation of Biafra is not a crime
But Chairman of the south east governor forum Engr. Dave Umahi stated that, the governors have agreed to articulate all the grievances and concerns of the people of the South East “as spelt out by the Ohanaeze Ndigbo”, saying: “We are happy that there is genuine willingness for further dialogue on such issues”.
Gov. Umahi maintained that Ebubeagu is the only recognized local security outfit in the South East, emphasizing that “no other security outfit is speaking for South East and this is the position of Ndigbo”.
According to him, “We are committed to one united Nigeria; we have always mentioned this; all our leaders are committed to this and that is why we read it everywhere, a united Nigeria of fairness, equity and equality of freedom and this we have further expressed.
“Those who dish out hate speeches from our region, threat of violence or secession do not speak for South East. I repeat, we the South East people are not for secession, we don’t support it; we don’t call for it.
Umahi noted that the stakeholders discussed issues on open grazing and that the delegates were in support of it. “We informed the delegates that each state of the region has laws in respect to the ban,”.
According to some Nigerians on social media reads below;
Joseph Okafor wrote;
Then subject it to referendum , it’s not up to you politicians to decide
Emmanuel Mbah wrote;
Did southeast Leaders reject Fulanisation of the whole South, jihadist war to take our lands and present killings going on now? I believe that so call Leaders have taken bribe. Agitation of Biafra is not a crime. We have lost so many we can’t stop agitation until Biafra is restored.
Chukwuemeka Anderson wrote;
They are talking for themselves, and the people mind must be granted, you are there to speak the mind of people and not your own mind
Prince Solomon Aham wrote;
Referendum has been conducted on may 30th.. OYO
Nwosu Nicholas wrote;
You are all on your own 99% of our people says breakup
Mamre Engr wrote;
We the south east my foot , who asked you to say such a selfish thing you camelion” look at group of decevers , no problem we thank God that our youths has beginning to rise up to demonstrate and demand for what belongs to them, some of you that has betrayed us over the years will one day face the realities of your deeds ,
Alban Nweke wrote;
Those southeastern leaders are not representing the entire southeasterns, they’re the problem we have in the southeast, they can remain in one Nigeria, because Nigeria has given them everything they need in life, we the masses will secede from Nigeria, they can relocate to the north.
Onyinyechi Okere wrote;
Don’t call them southeast because they’re not representing us just call them southeast politicians.
Onyeke Koko Obg wrote;
This is one problem with Black leaders.
They can never represent and respect their people’s opinion perhaps because they rig themselves into power even when their people are dying for their freedom.
IN a video interview,, Dave Umahi while speaking about ESN and herdsmen says: “…that is why the people seem to support them (ESN) while we the leaders don’t”
If he claims to represents the people, is it not contrary to oath of office when he fails to represent their opinion?
These men only represent themselves. People’s opinions don’t count. It is the way things are done in the Zoo.
But the opinion of the people shall prevail.
we shall teach them that we own them.
We shall drag them to feel the ill wind faced by the masses.
Chikaodili Ifediba wrote;
Masses shall decide the fate of Biafra in NigerArea not looters and criminal minded individuals who see themselves as lords over others. Referendum is the option.
Fidelis Kobis wrote;
They spoke their mind. Not my opinion. Don’t represent me
Comr Agu Melitus wrote;
They are just 0% of south East population