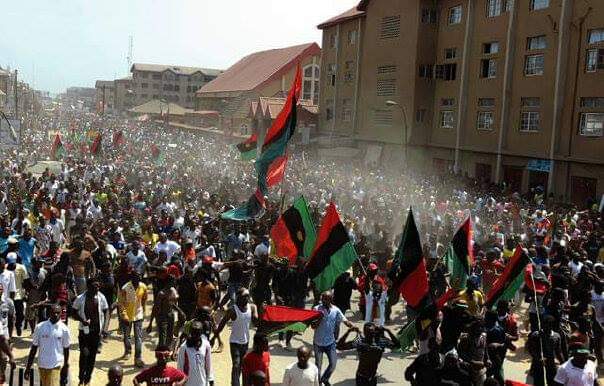 Indigenous People of Biafra (IPOB), yesterday, said nothing will stop the agitation for a separate state for Igbo as they are ready to leave Nigeria.
Head, Membership and Mobilisation for IPOB in Australia, Kennedy Ochi, who stated this expressed the readiness of people of the South East and South South to leave Nigeria as soon as possible.
In a statement, Ochi said compliance to the sit-at-home order by the Igbo and non-Igbo to mark this year’s Biafran day celebration was an indication that the people of the region and other Nigerians were already tired of the country and the President Muhammadu Buhari-led government.
The group condemned what it described as senseless killings of innocent youths from the South East by security personnel, alleging it was a ploy and systematic efforts by the Federal Government to wipe out youths of the zone and pave way for the eventual imposition of Fulani caliphate on South East people.
“A systematic genocide was meted out against Igbo, and till date, not even the Hague, the International Court of Justice, has deemed it fit to investigate what happened and why we are still agitating and crying for a sovereignty state of Biafra. It is our wish to sound a warning to the Nigerian government that it will never be business as usual. We are awake and ready to confront anything. The needful must be done and we must go back to the drawing board.”
Ochi described the 1999 Constitution as a fraud, saying it was not the people’s constitution, but a military constitution.
The leadership of IPOB in Australia while frowning at the recent tweet by President Buhari about the government’s plans to deal with agitators in the South East said: “We unequivocally condemn the reckless statement made by the Nigeria president on Twitter threatening punishment against the Igbo, and reminding us of the role he played during the Nigerian civil war that claimed millions of lives. It is only a dictator that can issue such a wicked and evil statement.
“We are very happy that this statement was condemned worldwide and several Twitter users reported to twitter owners the dangers of such a tweet which incites violence in the predominantly ethnically Igbo region.
“We are also happy that twitter took down the tweets and also suspended the president’s account for 12-hours.”