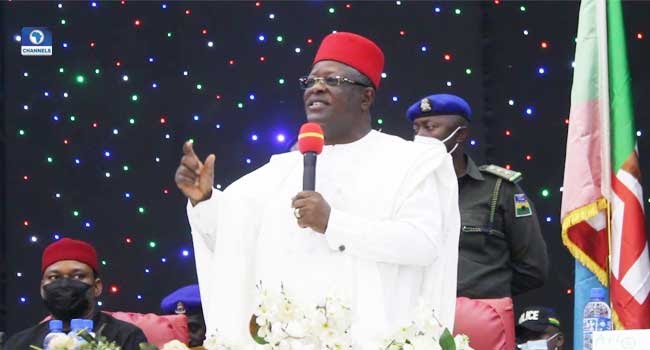 The Governor Of Ebonyi State, Dave Umahi has faulted the Leadership of Fulani for the ongoing killings happening in Southeast by killer herders, Gbam Tv learnt.
According to the Governor who is the chairman of Eastern Governors Forum said the reason why the people of southeast support Eastern Security Network(ESN), is because the Fulanis carry AK47 around with their cattles destroying people’s farm lands and messing with the environment with their cows.
Speaking further, Umahi urgues the Federal Government to give the herders money to develop cattle ranches most especially in the North to stop them from having causing nuisance everywhere.
Responding to the statement by Governor Umahi, A Social Media User, Somto OKonkwo while sharing the Video Speech said, “You Governors Failed To Protect Your Own People From Killer Fulani Herdsmen Who Slaughter Them With Impunity. ESN Came To The Rescue, But You Still Fought Them.”
Recall,  The governors of 17 states in Southern Nigeria have resolved to ban open grazing of cattle in their states in a recent joint meeting held on Tuesday in Asaba, Delta State.
Open grazing of cattle has often caused conflicts between host communities and migrant herders, leading to several deaths in many states, Premium times reports.
WATCH VIDEO