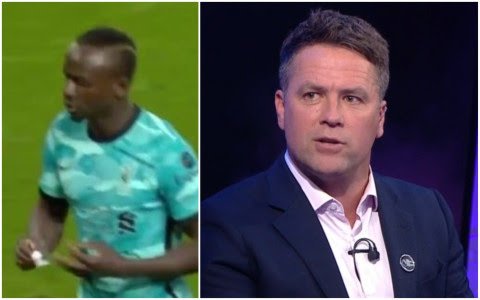 Michael Owen has criticised Sadio Mane for showing a ‘lack of respect’ towards Jurgen Klopp following Liverpool’s victory over Manchester United on Thursday evening.
Two goals from Roberto Firmino, as well as strikes from Diogo Jota and Mohamed Salah, helped Liverpool secure a 4-2 win at Old Trafford.
Mane, meanwhile, started the game on the bench and was brought on with 16 minutes remaining.
After the final whistle, Mane appeared to be furious with Klopp as the Senegal international snubbed the offer of a handshake from the Liverpool manager as he made his way back to the dressing room.
Klopp played down the incident in his post-match interview and revealed that he had made a late decision to start Jota ahead of Mane for Liverpool’s visit to Old Trafford.
‘I thought Jurgen Klopp played it well in the interview, played it down, didn’t want to take the shine off what was a great performance and a great win,’ Owen told Premier League Productions.
‘But, and there is a big but, you can’t do that to your manager, not in front of the glaring public.
‘Yes, go knock on his door tomorrow [after the game], yes, if you’re not happy then say something, but you don’t do that.
‘That’s a lack of respect. It sends a bad image to the fans, to his teammates.
‘Don’t forget, he didn’t play, three players did, those three players – Salah, Jota and Firmino – scored all four goals between them, so he’s [Klopp] hardly wrong in what he did.
‘I said before the game I’d play Mane, I think he’s wonderful, I think he’s a brilliant player, I love watching him, I’d have hated to have played against him if I were a defender.
‘But at the end of the day, the team that he did pick, the three strikers scored four goals. You [Mane] just can’t to that. That’s a lack of respect, especially with Jurgen Klopp who shows respect to everybody. I thought it was poor play.
‘I totally understand it, I’ve been left out of a cup final before, but you can’t do that. If you feel that strongly, go back to the training ground, text the manager or knock on his door, anything, so many different ways of reacting bar that one in front of the cameras. There’s so many ways you can deal with it, that’s the last way you deal with it.’
Meanwhile, Paul Scholes has accused Mane of acting ‘like a petulant child’ towards Klopp.
‘As a player you’re going to be really disappointed, of course you are, you haven’t played in such a big game,’ said the former United midfielder.
‘But I think he’s acted like a petulant child, really. A complete lack of respect for his manager.
‘He’s been left out of the team for a game, it happens, it happens to the best players in the world, deal with it. He needs to grow up, he’s acting like a little kid.
‘You’d say if the team had got beat then yeah, possibly he may have a little argument.
‘But to do that in front of the cameras, in front of the world, it embarrasses your manager. I think it’s a total lack of respect.
‘I see both sides but I think he’s totally out of order with what he’s done