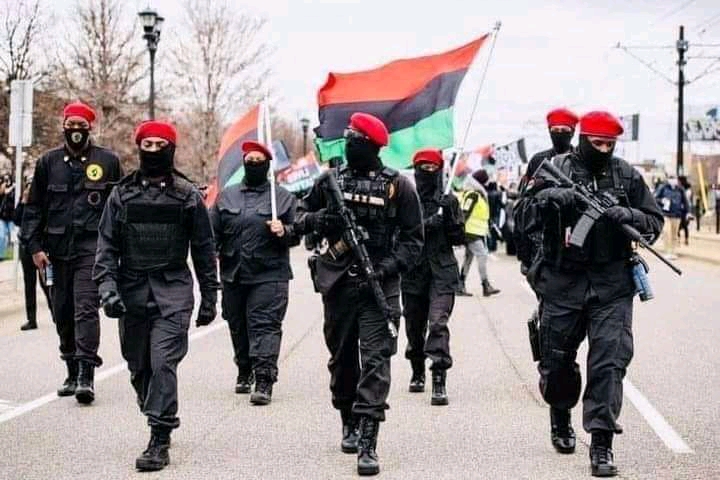 UMUAHIA — Mr. Nnamdi Kanu, a rights activist, called on the Nigerian government to prosecute a police chief, Ene Okon, within 14 days, warning that failing to do so would force him to direct an “immediate confrontation against him and his entire family “.
Reports had charged Ene Okon, who was a police commissioner in Abia state, for leading the team of government forces that attacked Kanu’s house and killed at least 28 civilians.
Former Nigerian army chief Tukur Buratai and others are among those charged in the report.
The house in Umuahia, the capital of Abia state, was shelled on September 14, 2017 by police and soldiers who attacked it shortly after Nnamdi Kanu, leader of the separatist group, the Indigenous Peoples of Biafra (IPOB), was granted bail by a high court in Abuja where he was held in prison for an alleged crime of treason.
“The former Police Commissioner Okon who it was that presided over the killings of my parents and 28 others in my father’s compound who was recently posted back to Abia state should immediately be arrested and prosecuted by the Nigerian government within 14 days,” Kanu said on a radio broadcast in the early hours of Thursday.
“He has now been promoted to AIG. And because we allowed him to get away with his dastard acts, he has again started issuing statements on how best to secretly go about abducting our people in Abia state. For this reason, I am giving the Nigerian government 14 days within which to arrest and prosecute him for his heinous crimes against humanity.
“Failure which I shall direct for immediate confrontation against him and his entire family. In readiness, I am directing that his pictures and that of his children, family members and every information leading to their locations be sent to me. He and his entire family must be hunted down,” he said further.
Kanu who escaped during the invasion of his home is in exile where he still leads the secessionist movement in Nigeria.
Security experts and activists had described the invasion of his home as an attempted assassination and called for the prosecution of those implicated in the act.
Source: GazetteAfrica