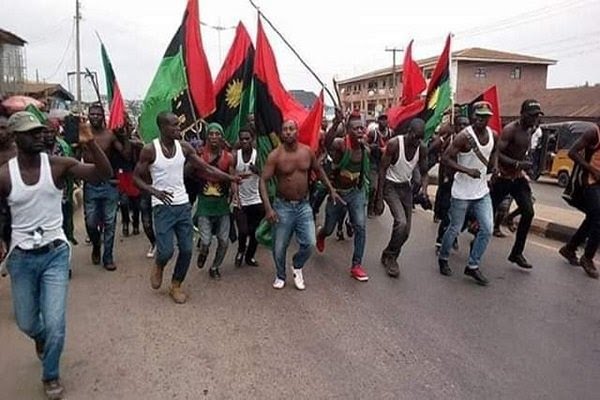 It has come to the attention of the Indigenous People of Biafra (IPOB) ably led by our great and indomitable leader, Mazi Nnamdi Kanu, that South East Governors; Ohaneze Ndigbo led by George Obiozo; treacherous tradinonal rulers and President Generals of some communities, are secretly compiling names of suspected IPOB members and ESN operatives across Biafraland. This wicked move was suggested by the Nigeria Government and her security operatives with hope to weaken IPOB and ESN making every effort to flush Fulani terrorist herdsmen out of our land.
Our efforts to stop Fulani terrorists herdsmen in the East have indisputably intestified since the formation of ESN but regrettably, the politicians and government officials including local authorities in some communities in South East are sabotaging these efforts. They have bargained vwith Nigeria security agencies to abduct anybody suspected to be IPOB member or supporter.
IPOB intelligence unit gathered that these enemies within and without have perfected arrangements to abduct our people and put them incommunicado in the security dungeons in unknown locations. IPOB is therefore, issuing a stern warning to these Miyetti Allah slaves to be careful because they must answer for their actions.
We advise Nigeria government and her partners in crime in the zone to desist from this evil agenda because it will backfire. We are aware of their secret file, but we are not going back until Biafra is finally achieved.
The South-Eastern Governors in collaboration with all the Traditional Rulers in the Zone and the PGs of all the Communities in the Zone are compiling names of suspected IPOB members in their respective communities to hand over to Nigeria security agencies for possible executions. The arrangement has been perfected to help Nigeria Police and Army to quickly pick anybody suspected to be IPOB member and ESN operatives in the zone.
Our intelligence further revealed that they took this decision to launch this joint military operation to quench and permanently silence what they termed as IPOB and ESN menace in the zone. It is unfortunate that our so called leaders could not see or observe how Fulani terrorist herdsmen were raping and murdering our mothers, wives and sisters in the farms across the Biafra territory.
We have severally explained that ESN has nothing to do with the unknown gunmen responsible for the attacks in South East. We wonder why Government will continue to associate us with that group without investigations.
The Nigeria Government and her partners in crime must understand that IPOB cannot be decimated no matter what they do. The unknown gunmen are not ESN or IPOB. The federal government of Nigeria which still sponsors killer Fulani terrorists herdsmen terrorising citizens in the zone cannot deny sponsoring the so-called unknown gunmen.
If South East Governors do not stop this plan against their people IPOB will make the zone too hot for them.
We expect all tradinonal ruler and P/G’s in the South East communities to retrace their steps before it gets too late. The land will also rise against them if they allow this to happen!
Any IPOB member or ESN operative killed shall be avenged!
COMRADE EMMA POWERFUL MEDIA AND PUBLICITY SECRETARY FOR IPOB