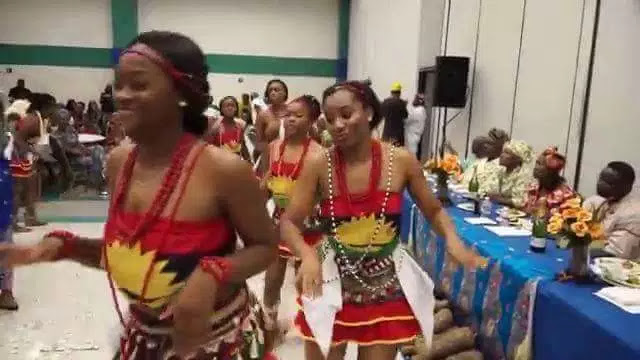 The Indigenous People of Biafra
AWKA—THE Indigenous People of Biafra, IPOB, reacted yesterday on the report that the Federal Government was planning to grant amnesty to Boko Haram insurgents, arguing that such a move was a confirmation that the entire information management machinery of the All Progressives Congress, APC, -led government was run on lies.
IPOB  media and publicity secretary, Comrade Emma Powerful, in a statement, asked whether it was not the same Boko Haram which the Minister of Information, Alhaji Lai Mohammed claimed to have defeated. IPOB members on solidarity march The statement read: “How come they are negotiating permanent ceasefire with Boko Haram?
Are we now to believe that Boko Haram was not defeated in the first place? “It is not a surprise to us that the President Buhari- led APC government is now seeking to acknowledge publicly what they have been doing in secret all along, which is, granting early release and amnesty to confirmed killers and terrorists.
“There is something about the mindset of this administration that predisposes it to killers and terrorists. What this move confirms, even to the most ardent supporters of the government, is that Boko Haram is part and parcel of the present government.
“President Buhari appears to have a deep affinity with the tendencies of Boko Haram, the same way he has become beholden to killer herdsmen that are decimating innocent non Muslim populations across the Middle Belt and Southern Nigeria.
“Boko Haram’s well documented atrocities propelled Buhari into office and so, he is reciprocating that very gesture now through this amnesty, in the hope that a comprehensive agreement with the terror group will guarantee him a second term.”
According to Powerful, “as long as politicians from Southern Nigeria and Middle Belt were still divided in their respective approaches to the issue of Nigeria’s existence, the core north would continue to take advantage of the one Nigeria mindset to perpetuate impunity whilst in government.
He urged well –meaning people to seek the reaction of Chief Nnia Nwodo- led Ohanaeze Ndigbo and South East governors that proscribed peaceful IPOB on this issue of Boko Haram amnesty, as well as their take on the supposed release without trial of killers of Igbo people at Mubi and Madala, among others.
“The silence of these groups namely, Ohanaeze Ndigbo and South Eastern Governors, who themselves conspired to invite the Nigerian military to commit mass murder in Afaraukwu Umuahia, Ngwa, Aba and Igweocha (Port Harcourt) means they should bury their heads in shame.
“The same Hausa- Fulani rulers they were desperately trying to please by proscribing IPOB activities are now the same people setting free ,killers of Igbo people in the north without the courtesy of mere consultation to seek their opinion.
“Hausa- Fulani leadership is busy protecting those that killed Igbos in the name of Islam, while Igbo politicians and Ohanaeze Ndigbo are busy helping the same north to kill their own people who are non-violently fighting for their freedom.
“Where is therefore, the morality in the stance of Nnia Nwodo, Governors Okezie Ikpeazu, Dave Umahi, Willie Obiano, Rochas Okorocha and Ifeanyi Ugwuanyi against IPOB? Let the people and posterity judge them”, IPOB said.