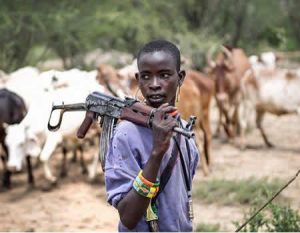 Raphael Ede, Enugu
Tension is currently high in Enugu State as Fulani herdsmen attacked Okpanku community in Aniri Local Government Area of the state and machete a security guard.
Daily Sun gathered that the incident occurred on Easter Monday.
It was gathered that the incident has raised the security antennae in the community as youths are preparing to go all out for a reprisal attack.
According to community sources, “The Fulani herdsmen were carrying their cattle passing the community when suddenly the herders entered inside the compound of one Barrister Eric Ogudu and started plucking mangos in that compound.
“The security guard in that compound (name withheld) tried to stop them but they refused and in ensuing tiff they gave him several machete cuts in his arms and shoulder.“The guard started shouting Fulani people done kill me! And immediately the attention of the people were drawn and the villagers that came out started pursing them”, a source disclosed but said that the herders reportedly ran into the bush.
It was further gathered that owner of the compound, identified simply as Barr. Eric, has already made statement to the police at Aniri Divisional Headquarter in Okpanku, and a team of policemen have been deployed to the community who are currently trying to calm the youths of the community who are bent on fishing out the herdsmen who carried out the attack.
At the time of filing this report, the security guard was said to have been taken to hospital for medical treatment.
When contacted, the spokesman of the police in Enugu, Superintendent of Police, Ebere Amaraizu, confirmed the attack on the community.
According to him, “Police have commenced investigation into the matter.”