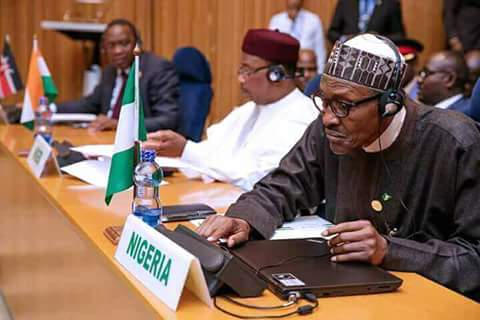 Have you ever wondered why many nations that always shout that Nigeria is corrupt will always be the first nation to do business with Nigeria?

Worry no more because am about to expose the reasons behind such demeanor here.

Nigeria and her continuous existence is a blessing to many countries especially Britain. The corruption ravaging Nigeria from time immemorial till date favors them more. Have you ever imagined why David Cameron, the former British Prime Minister whose resignation gave rise to the emergence of Theresa May as the new British Prime Minister, said that Nigeria is “fantastically corrupt” knowing that the continued existence of Nigeria lies in the unflinching and tactical support of the British due to their economic benefits in a united Nigeria through internal colonization via HausaFulani hegemony?
David Cameron before his resignation was caught on camera telling the British Queen Elizabeth, that Nigerian leaders are “fantastically corrupt”. This is pure truth and nothing to reduce from that.

The British companies and many other companies criminally drilling oil in Nigeria are soaked with corruption. That was why they fronted Abacha in the murder of the Ogoni Nine and their leader Ken Saro Wiwa, who were seen as traitors for being environmental and political activists, giving voice to their people.

The Nigerian state through their oil drilling scavengers has continued to pollute both the air, water and land, in the coastal region, thereby making the inhabitants thereof to be dying of air polluted diseases. There are little or no land to farm in which causes hunger and the aquatic life are seriously endangered as they die due to contaminated water. Life has become uninteresting and unworthy for those inhabiting the coastal region where Nigerian oil is domicile, hence they now see themselves as endangered species in their own motherland without reparation or compensation from both the government and the foreigners.

However, any mega corruption taking place in Nigeria benefits the west most. The under-development of Nigeria, waters the business and economic of Britain and many other countries. Britain’s support of a united Nigeria is not for the benefit, progress and development of the entity called Nigeria. They have continuously used the North to keep milking Nigeria dry. It is not a coincidence that the North have ruled Nigeria for more than 45years in her 58years self rule. From the time of Tafawa Balewa till date. All Northern elements that made it to the highest political office in Nigeria have been there to help their British paymasters to gain more profit at the detriment of the country and her citizens.

As far as Britain is concerned, corruption will never depart from Nigeria. It was Britain that instituted corruption in Nigeria through giving a false and misleading census results after the ill-fated independence, favouring the North against the Southern Nigeria, hence handed Nigeria over to the North. A region that have continuously cried over not being ready to govern themselves, they gave the entire Nigeria to govern. They planted the North so as to manipulate them to gain access to the resources in Nigeria. Britain also rigged the first election ever conducted in Nigeria so as to plant a myopic mediocre Northerner. They brought favoritism into Nigerian political sphere.

This is exactly why Britain never allowed Biafra to live or survive after declaration. That was why Britain during the Biafra war, went against nature and humanity to assist Nigeria in levying an aggressive war against Biafra. They actively joined in the killing of more than 3million Biafrans both men, women and children. Morality and respect to the sanctity of human life, became nothing to them. They placed their economic interest above humanity. They also used every means available to shade and cover the atrocities they committed in Biafra to the extent that, there were high magnitude of media blackout during and after Biafra war. Biafra nation to them, stands against their business empire and economic benefits.

Invariably, when Gowon was saying “to keep Nigeria one is a task that must be done”, he was just making known the wishes and interests of the government of Britain.

The only hope for Nigeria and Africa in general will be the emergence of the Republic of Biafra as a sovereign nation. Biafra will restore hope and much needed patriotism to Biafrans and also to Nigeria. Biafra will rebirth the ingenuity of 1966/70 to the people and with it, places other new emerging nations to healthy competition with Biafra. Above all, the restoration of a Biafra Republic, will reduce corruption to it’s bearest minimum and there will be drastic reduction in migration of Africans to the West.

Britain should as a matter of fact restore their dignity and integrity by supporting Biafra referendum as against the impunity they supported in 1966/70 and even till date.