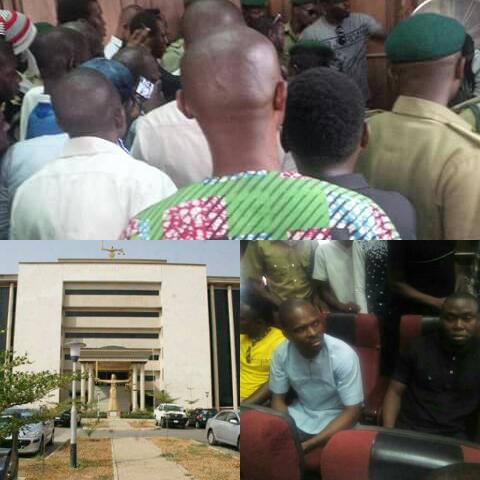 LABARAN, JUSTICE BINTA NYAKO ON THE RUN.
The proceeding ran thus at exactly 12:24 pm immediately after the appearance of honorary.Justice Binta Nyako{Mrs},by a flow of introduction of the case bordering the whereabouts of the leader of the indigenous people of Biafra, citizen Nnamdi Kanu{POC}followed by introduction of both councils as led by S.M Labaran who is appearing for the State, Barr.Ifeanyi Ejiofor and co, appearing for the defendants and of course, the council appearing for the sureties. Also representing is Barr.Ibrahim appearing for the Chief of Amy staff,Turkur Buratai.
On the commencement of the proceeding,Barr.Ifeanyi Ejiofor who is defense council, stood up and  let the court know that the sureties are in the court ready to narrate their ordeal leading to the whereabouts of Nnamdi Kanu. Going further, one of the council appearing for the sureties, prayed with some quotations of the law,praying that the court should please allow the sureties to speak before the court on why Mazi Nnamdi Kanu has not been in the court since he was granted bail.
Barr.Labaran on his adumbration decided to divert the proceeding,stated that the court should as a matter of justice, initiate an order for the first defendant whom according to him is setting the processings backward to appear before the court to enable the fast commencement of his tria with every possible means known by law. In a more dramatic manner, Barr.Ifeanyi Ejiofor,the led council of the indigenous people of Biafra, rose before the court and challenge the praying made by Barr.Labaran who as matter of his praying, are diverting the purpose of the business of day. While he was proceeding,it came as a surprise when Labaran stood up to say he was not aware about what today’s proceedings is all about. He further said that he was not served while Barr.Ejiofor insisted that he was served properly on time.
While the fight is going on,the presiding Judge, hon.Justice Binta Nyako angrily says that she can’t allow such drama to continue in his court. She therefore urge the two councils to settle within themselves for it seems like they are not yet ready for the case.
Funny enough, before the blinking of an eye,the prosecutor as represented by Barr.Labaran Shaibu who is suppose to stay back for the commencement of the bail applications tabled before the court disappeared followed by the judge. It came as a shock to Barr.Ejiofor who were jotting down the date of the adjournment only to raise his face and see both the prosecutor and Justice Binta Nyako no more.
Very unfortunate that the case bordering the bail applications of innocent Biafrans who has been in detention facilities for the period of three years recording can no longer be heard,due to the dramatic disappearance of both the prosecuting council and the judge.
Most alarming is that, the life of Benjamin Mmadubugwu who have been seriously ill are in danger languishing in prison custody without either trial, granted bail nor applying any form of medical attention.
As the ugly drama unfolds, it is now more clearer to humanity that there is a conspiracy between Nigeria government and of course, her totally compromised judicial system to eliminate our brothers in their custody.